Motivating more people to take walks instead of using the car or the public transport is one of the strategic goals announced by the city of Vienna this year. The app Wien zu Fuß went the extra mile to support this mission with an interactive augmented reality app to make pedestrians’ walks a fun experience while exploring the Austrian capital.

We’ve been implementing AR concepts into our apps for years and now changed to Wikitude, which was easy to implement with the Cordova Plugin and added the features we need in our app. Wikitude’s technology is excellent to provide a smooth user experience!
Marko Göls | Head of Digital Projects

True to the motto “a city where its citizens walk is a liveable city”, the Wien zu Fuß app (or Vienna by feet in English) was developed to engage users to walk through the city of Vienna with a fitness, fun and gaming twist. The app includes a step counter, a city map routing with points of interest filters and the possibility to redeem vouchers for earned steps. An augmented reality treasure hunt based on the Wikitude technology was integrated, where pedestrians can collect diamonds scattered all over Vienna.

In the AR game, users can collect diamonds when they are close enough to relevant points, which is one of the main features to engage people to walk. 1.000 diamonds were placed all over Vienna. Grey diamonds show up to indicate a nearby collectible. It turns blue when the user is close enough to pick it up to afterwards turn yellow when it is finally collected. On the map all collectable diamonds are shown and can be defined as routing point. The very precise routing- and map features of the app help pedestrians find the optimal way to the target. Due to other activating functions like googie-vouchers, the step counter, the step history and the step highscore, where users can compete against each other in an overall ranking or just a Facebook friends highscore, the app enjoys great popularity. More than 600 users actively take part in the step counter competition after one month, where more than 1 million steps are reported each day. 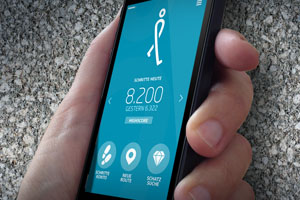 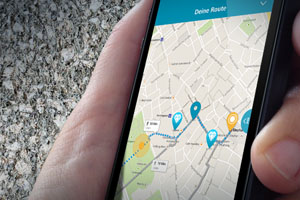 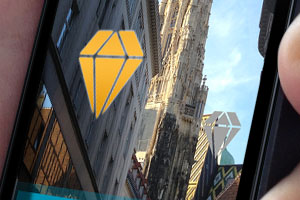 The Wien zu Fuß App was developed by cross-platform-specialist and Wikitude Premium Partner Digitalsunray Media, and was introduced in April 2015 for iOS and Android as part of the communication campaign designed by Havas Worldwide Wien.

Interested in creating an AR project of your own? Talk to one of our specialists and learn how to get started.