# Introduction to object and scene tracking

Object Recognition and Tracking extend the capabilities of the Wikitude SDK to recognize and track arbitrary objects for augmented reality experiences.

Object Recognition and Tracking let you detect objects and entire scenes, that were pre-defined by you. Suitable objects include

Recognition works best for objects that have only a limited number of changing/dynamic parts.

The object tracking engine of the Wikitude SDK can also be used to recognize larger structures that go beyond table-sized objects. The name Scene Recognition reflects this in particular. The new image-based conversion method allows for Object targets that are a lot larger, that can be successfully recognized and tracked.

Make sure to read the chapter on how to create Object Targets before using Object Recognition on your own.

To add an object tracker to the scene, simply create a new GameObject and add the ObjectTracker script to it.

An ObjectTracker itself needs a Wikitude Object Collection (.wto file) which contains information needed to detect the reference objects. Target collections can be generated and downloaded from Wikitude Studio - a free web based tool, that you can access with your developer account. You can use the .wto file in the same way as .wtc or .zip files are used for the ImageTracker.

Custom augmentations are defined exactly as for an ImageTracker, so please make sure to check the chapter on Image Tracking as well.

In the Simple - Object Tracking scene, the Drawable prefab workflow is illustrated. A FiretruckAugmentation prefab was created in the SamplePrefabs folder and assigned to the ObjectTrackable. The transform of the prefab has been modified so that the augmentations will match the real object during tracking.

Within the FiretruckAugmentation prefab you will also find the FiretruckOccluder GameObject which contains two meshes that are used as occluders. You can read more about occluders and how they work in Unity here.

If the tracker is using a .wto file located in the StreamingAssets folder, the ObjectTrackable inspector will show a list of all the targets in the .wto file. By toggling the box next to each target, you can select which ones will be tracked by this trackable, or you can choose Select All at the top to include all the targets.

By pressing the Preview button, the target's point cloud will be displayed in the 3D view of the scene, providing a convenient way to place your augmentation relative to the target. You can determine the size and color of the points in the 3D representation by setting the desired value in the Point size and Point color fields. 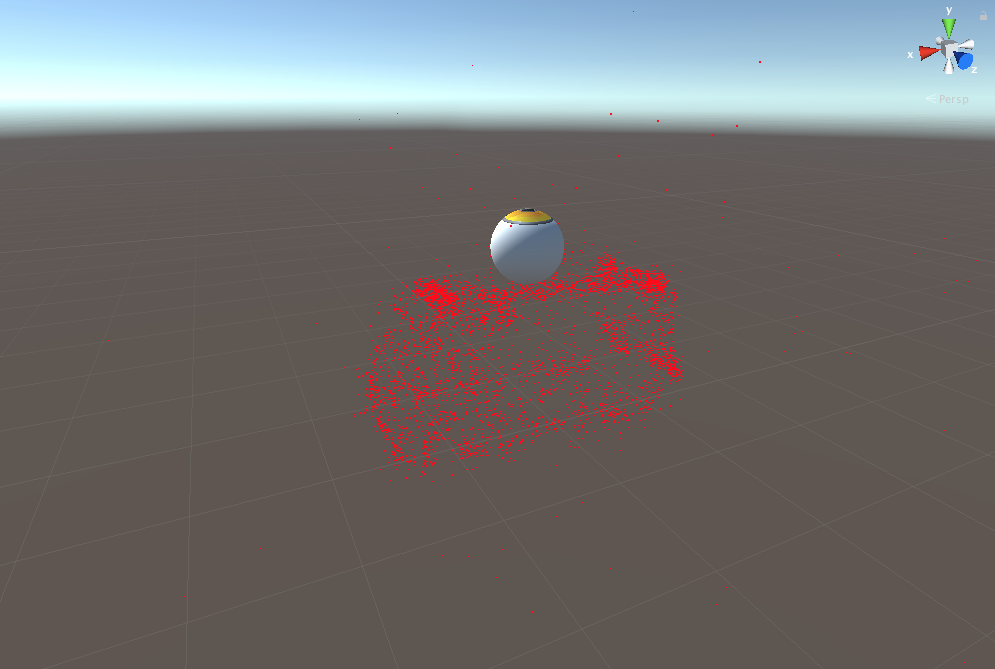 If the .wto file you are using is not located in the StreamingAssets folder, kindly make sure that the targetName used with the ObjectTrackable component corresponds to one of the target names in your target collection. You can also use wildcards to match any target or only a specific subset of targets.

In order to place 3D objects at the location where the reference object was found in the camera stream, add any prefab in the Drawable field of the ObjectTrackable.

To handle visibility manually, you can subscribe to the OnObjectRecognized and OnObjectLost events on the trackable. This can be useful when you want to show different augmentations based on which target was tracked or if you want the augmentation to persist even after the target is no longer visible, if AR Bridge is used. The string parameter of these events will indicate which target was tracked or lost.

# Multiple objects at the same time

Similar to the possibility to recognize and track multiple different images at the same time, the Wikitude SDK also supports the same functionality for objects. It's possible to add a single tracker with a combined target collection and with multiple target tracking enabled (same as with Image Targets) or use multiple trackers with single targets.

Please keep in mind that each additional tracker incurs a small performance penalty, so please don't use more than are actually needed.

In the screenshot below, you can see how an ObjectTrackable is configured with a combined target collection. 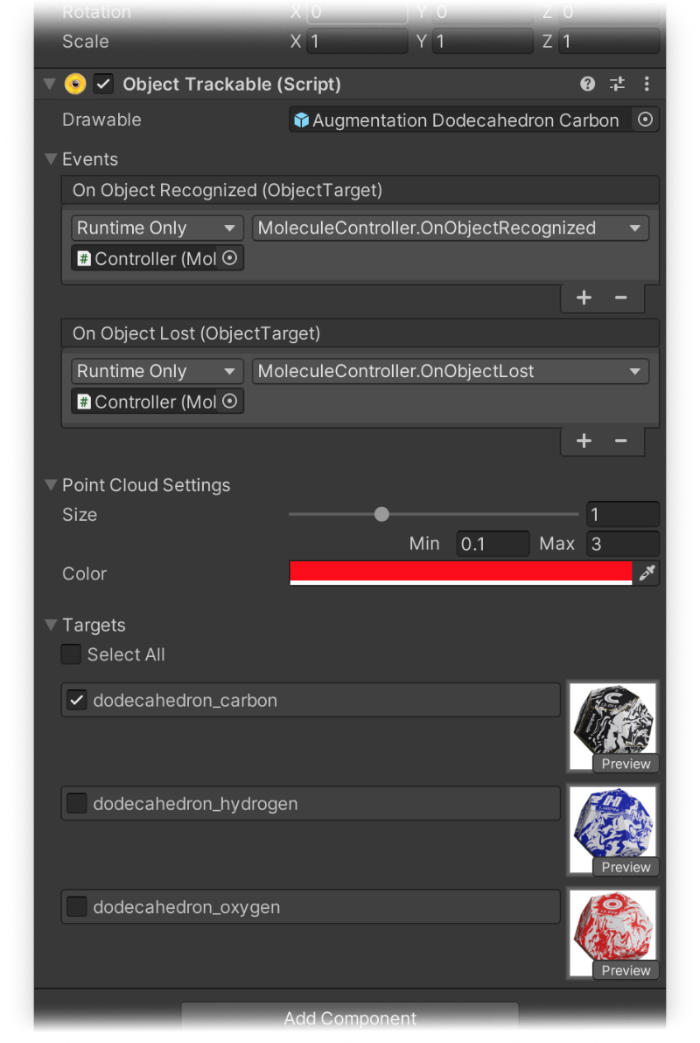 To get a better understanding of how experiences with multiple objects are made, the Multiple - Object Tracking sample scene from the Unity Plugin is described in detail in this section.

This sample scene allows recognition and tracking of up to two carbon-themed, two hydrogen-themed and two oxygen-themed dodecahedrons resembling atoms. There are five "molecules" that can be shown by combining these "atoms".

The more objects there are tracked, the more it will impact performance, which can lead to lower framerates depending on the device.

Most of the logic is implemented in the MolceculeController.cs script. The Object Tracker registers callbacks to this script to notify if an object has been found or lost. 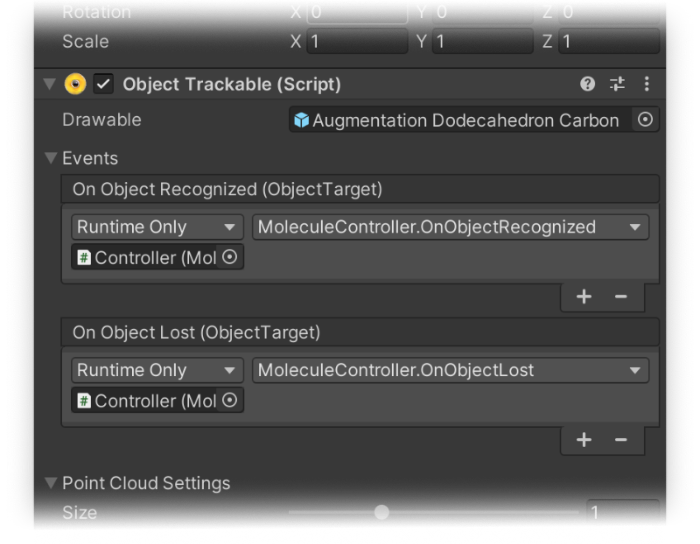 The found atom is then stored in a list of GameObjects. If this list is altered, a calculation is triggered to see, if there are any possible combinations. The possible combinations for molecules are stored as a string array, where each element defines a central atom and the atoms to surround it. "OHH" defines for instance an oxygen atom with two connections to water atoms.

The CalculateCombinations method iterates through each possible molecule defined before. Since the array is also ordered from bigger molecules to smaller, the calculation will stop, if a match has been found. The atom gameobjects name contain their names from the .wto file. That is enough to differentiate between the atoms. A simple check is then applied to find a matching molecule. If a molecule is found, its descriptive name is stored in _possibleMoleculeCombination. New connections to the needed atoms starting from the central atom will be drawn in the Update method, if _possibleMoleculeCombination is set. That's where the second important controller plays a role. The ConnectionController.cs takes the transform from a central atom, the transform from the atom to be connected and the element letter (for instance "O" for oxygen).

Once the other atom is in close range to the center of its placeholder, all transparent objects are replaced by silhouettes and a billboard with success notification is shown, signalling that the connection is linked. The occlusion shader of the augmentations of the atoms clear out the space of the dodecahedrons from all the white seen in the image below, resulting in the silhouette effect seen in the video. 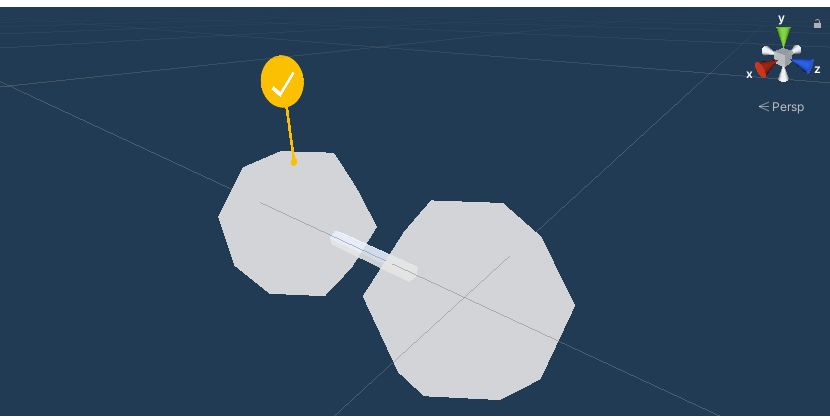 The augmentations of the objects are fairly easy. A dodecahedron was modelled in Blender (opens new window). Afterwards, one of the faces was removed. After duplicating and shrinking the model, the normals were inverted. Finally, the two dodecahedrons were connected by connecting the edges of the missing face. This ring and the two dodecahedrons got three different materials assigned to them. After importing this model into Unity, a quick alignment with the real object had to be done. In order to do so, the model was set as the drawable of the Object Tracker. In Play mode, the drawable was rotated to fit the real object and the transform values were copied and applied after exiting Play mode.

After applying different materials (occlusion shader for the outer dodecahedron and unlit shaders for the ring and the inner dodecahedron), the atom nucleus and electron layers were added. The atom nucleus consists of small objects in red and white (to visualize protons and neutrons), which have a simple random jitter behaviour assigned to them. Additionally, the nucleus rotates around its center giving it a nice look in total. The electron layers consist of two electrons each. A line renderer drawing their path is calculated on the play and a rotation behaviour is applied to each layer. The resulting augmentation can be seen in the video at the start of the section. The scripts, prefabs and additional files used in the sample can all be inspected and played around with in the Unity Plugin.

For objects that are particularly difficult to recognize automatically, the alignment initializer can be used as a way to initialize tracking for objects. How this is done in general and how the sample Alignment Initialization is implementing this, is described in the following chapter. A more formal definition of alignment initialization can be found in our section Concepts and Definitions.

To assist the SDK in finding the object, the ObjectTracker needs to be configured to use Alignment initialization in the Inspector. 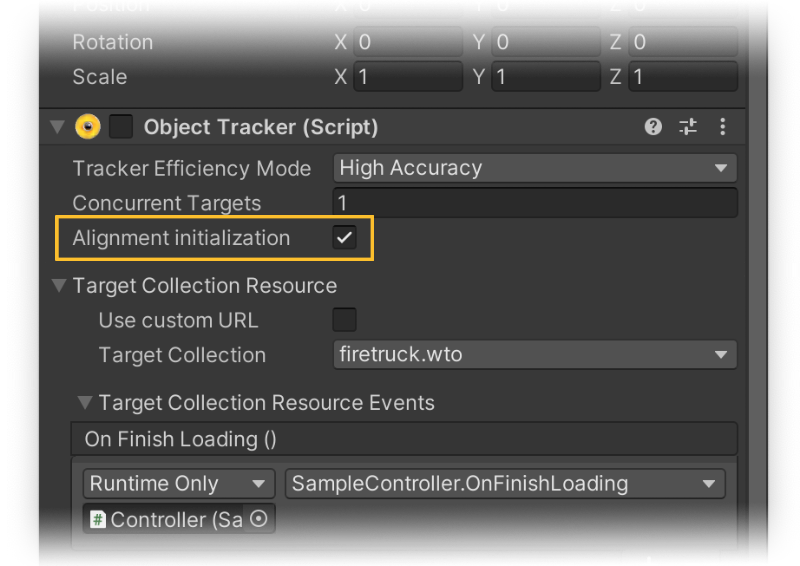 Once this is done, the new ObjectTracker.UpdateAlignmentPose method can be called with a Matrix4x4 pose that provides a hint to the SDK as to where the object is located in the scene. This pose represents the relative position of the object to the camera.

Alignment initialization only works with single objects, so please make sure to only include one ObjectTracker in your scene and that the .wto file being used only contains a single object.

The general setup of the sample is very similar to the other object tracking samples described above, but instead of recognition working automatically, the user needs to align a silhouette of the target object with the real-world object. Please keep in mind that while the sample uses an interactive 3D model as a silhouette for the user, a simple, static 2D image can also be used as a guide, as long as the pose that is sent to the SDK matches what is being displayed.

To properly display the silhouette, a separate camera rig is created, as described in the screenshot below.

The Alignment Initializer GameObject contains a Camera component that will render the silhouette on top of the camera frame. Additionally, this GameObject contains the AlignmentInteractionController script, which will manage the sample. One important aspect to note here is that the Field of View of the camera needs to match the one from the Main camera, otherwise the silhouette will have the wrong relative size.

The Alignment Drawable Firetruck GameObject controls the relative pose of the silhouette to the camera. The user is allowed to move and rotate this GameObject and its transform will be sent every frame to the SDK as a hint.

Please keep in mind that only the rotation and translation should be changed, and never the scale. To make the silhouette appear bigger or smaller on the screen, simply move it closer or farther from the camera.

Finally, the Firetruck GameObject is used to align the rotation, position and scale of the 3D model to the point cloud from the associated .wto file. The best way to do this alignment is to make sure that both the Alignment Initializer and the Alignment Drawable Firetruck transforms are set to identity. After that, simply enable the point cloud visualization from the corresponding ObjectTrackable and align the Firetruck Transform to match. 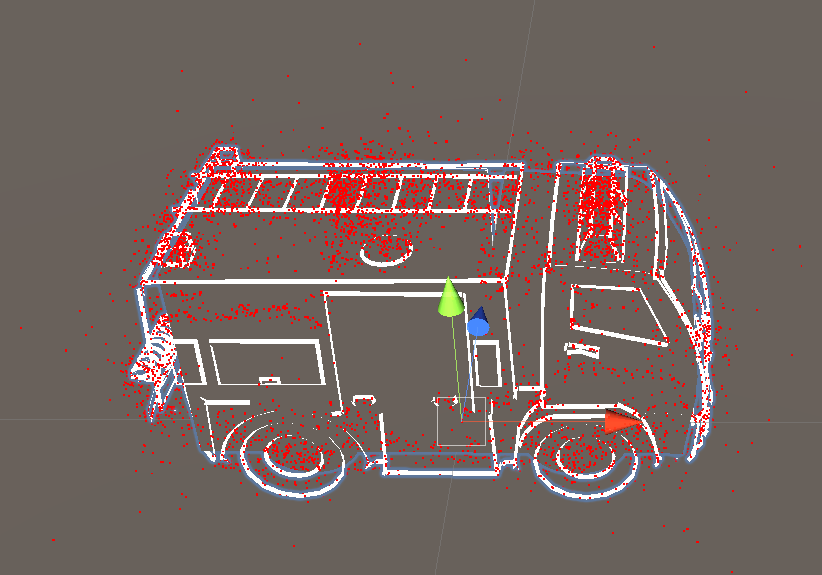 You can then move the Alignment Drawable Firetruck GameObject back to a position in front of the Alignment Initializer camera. This will make sure that the initial pose is something reasonable and users don't need to spend too much time doing any additional adjustments.

Once the scene was set up in the way described above, we just need to pass the Alignment Drawable Firetruck transform to the SDK: