Multiple trackers can also run at the same time, thus making it possible to combine image, object and cylinder targets in the same AR experience.

# Using multiple trackers in a scene

To use multiple trackers in a scene, simply add the required Image Trackers or Object Trackers, as described in the previous chapters. Trackers are independent of each other, so there are not additional configuration steps when working with multiple of them.

It's also possible to add multiple trackers of the same type, but please keep in mind that this is not as efficient as having a single tracker with a combined target collection and with multiple target tracking enabled. In the screenshot below, you can see how an ImageTracker and an ObjectTracker are configured in a single scene. 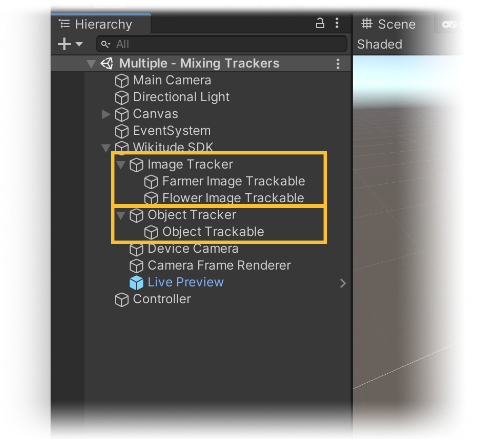 Please see the Multiple Trackers scenes for more examples of how to properly set this up.

In general, it is advisable that both image and object targets have the correct Real-world Scale associated with them. This makes authoring augmentations much easier, as a common, real-world scale can be established for all of them. However, this is much more important if you plan to use the relationship between targets in your AR experience. Examples of such use cases include:

When the real-world scale is correctly set, the targets are correctly positioned in world space so that all of these relationships can be directly observed or measured. When doing so, please keep in mind that 1 unit in Unity is considered to be equal to 1 meter.

It is also possible to combine multiple trackers with AR Bridge. The setup is exactly the same as before, regardless if you're working with the Internal AR Bridge implementation or with AR Foundation Plugin.