“The Speaking Celt” app is a companion app to visitors of the Museum of Celtic Heritage in Salzburg. Serving as a museum guide, the augmented celt appears every time users scan the targets. The celt tells stories about his way of living, explains elements of the museum and engage with visitors in an interactive way. Once the day is over, an augmented celt makes sure to ‘guard’ the museum day and night, protecting all the treasures inside the building.

By working together with Schneeweis.Technology and Wikitude, we were able to do something that no one did before: having animated avatars guide through a museum! 'The Speaking Celt' is a completely new way to experience a museum visit - a game changer in museum technology!
Florian Knopp | General Manager - Keltenmuseum Hallein

Museum visitors use the app “The Speaking Celt” (German: Der sprechende Kelte) as an interactive guide through the museum: Animated Celt avatars, one Celtic warrior, on Celt called ‘Tabico’, appear in the display cases next to artefacts in Augmented Reality, after scanning a target. A ‘target’ is a round image that tells the visitor that there is additional content within a display case to discover. The inspiration came during a workshop with Schneeweis.Technology, when we were brainstorming how Augmented Reality can be used within a museum. Having animated avatars, who explain the artifacts in a display case sounded like a fascinating idea – if it works… It started as an experiment, and after we saw the first prototype, we were convinced that this is a game changer in museum history! After we saw the technology working, the most important aspect was to polish the avatars and to write inspirational and historic correct texts and stories. The added value for the museum visitor is that history is being told in a very personal, emotional and innovative way. Bent iron parts of a celtic chariot become much more lively when the former owner of this chariot explains what happened to them! 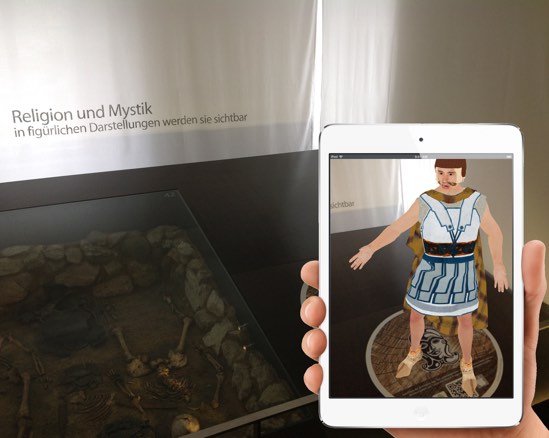 For the development of the app, Schneeweis.Technology used the Wikitude SDK to do the image recognition and to display the 3D avatars.

We believe that Augmented Reality is perfect for museums, as it is a great tool to bring history to life: It is interesting for kids and adults as well, it is much more cost effective to build virtual animations than real ones, the museum does not need extra hardware because museum visitors use their own (except for a few iPads and tablets we rent out), the app is Social Media capable(!), and lastly the animations don’t need actual display space.