Powered by Wikitude image recognition technology, with the One Direction 1D companion app for iOS and Android mobile devices, users can activate hidden, never-before-seen content by placing their mobile device over motifs and photographs within the book, as illustrated by the band’s welcome in-app video. This includes exclusive access to photos, videos, interviews, intimate clips from the band’s first audiobook and quiz questions, fed into the app throughout the year via the CMS.

We're so pleased to be offering fans of the global juggernaut One Direction something really special this year with the 1D Official Book app – a truly complementary print and digital offering that brings to life the guys' story in a whole new way.
Rachel Kenny | Digital Editor at HarperCollins 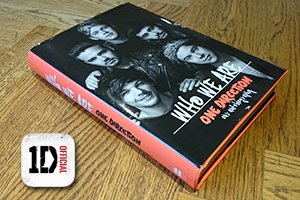 Released on September 24, 2014, with the accompanying book release on October 7th, the One Direction autobiography, “Who We Are,” app was downloaded more than 60,000 times within the first two weeks.

The app allows users to access the guys’ story, as told in their first ever in-depth official autobiography Who We Are. This content includes photos, videos, interviews, clips from the band’s first audiobook and a gamification element via quiz questions. Designed and developed by Re:Systems, Harry Styles, Zayn Malik, Niall Horan, Liam Payne and Louis Tomlinson all have interesting and intimate stories to share via the app. Fans can log on to the app via Facebook, allowing users to share the app with friends to build points and enabling HarperCollins to capture user data while ensuring that age-dependent privacy guidelines are adhered to. The book is available from a wide variety of retailers, with both iOS and Android versions of the companion app.

Interested in creating an AR project of your own? Talk to one of our specialists and learn how to get started.