Night at the Museum: Secret of the Tomb

Redberry Digital was selected and tasked by 20th Century Fox to develop an accompanying app for the third instalment of the blockbuster “Night at the Museum” franchise. Looking to go above-and-beyond expectations, Redberry Digital turned to Wikitude to add a geo-location aware component that featured a 3D model of a Triceratops that could be unlocked and displayed on London’s Regent Street.

As well as delivering a location-specific experience through GPS, the addition of the 3D modeled Triceratops provided that extra touch, bringing the campaign to life and driving real-world engagement through the app
Tim Redgate | Co-founder at Redberry Digital 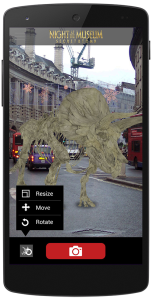 Redberry Digital worked closely with 20th Century Fox UK and the British Museum on an innovative iOS and Android smartphone app which brought the blockbuster, “Night at the Museum: Secret of the Tomb” to life in London, the main filming location of the third instalment of the franchise. Users of the app are challenged with going on an adventure to save the dying Tablet of Ahkmenrah, just like the characters in the film. This is done by locating and scanning each of the tablet’s nine symbols. Behind each symbol is a simple challenge which, if completed successfully, unlocks exclusive film and additional content. Unlocking the symbols gives users the chance to enter an amazing competition to win a sleepover in the British Museum. The symbols were displayed on social media, print media, around the British Museum and in selected locations along Regent Street.By scanning the Night at the Museum 3 poster on Regent Street, a 3D model of a Triceratops, powered by Wikitude was triggered. The app takes advantage of the award-winning Wikitude SDK‘s powerful Image Recognition, 3D modeling and geo-location capabilities. Users are tasked with scanning the film’s promotional poster at a specific location, thus unlocking the augmented reality content.