Shortly before winning the 2017 Auggie Award for ‘Best Developer Tool’, Wikitude saw its AR technology surpass the one billion install mark. It is awesome to see the +100.000 Wikitude developer community expanding and spreading the AR magic. Augmented reality is growing strong.

A research conducted by Aeon Mobile Research shows that, in fact, the whole AR app industry has had an impressive 35% increase in AR apps throughout the vast majority of categories in the market in the last 6 months. Retail/E-tail presented the biggest increase by a whopping 82%, followed by 71% in gaming, and 60% in the art category. Check the trending AR app infographic below for more details. 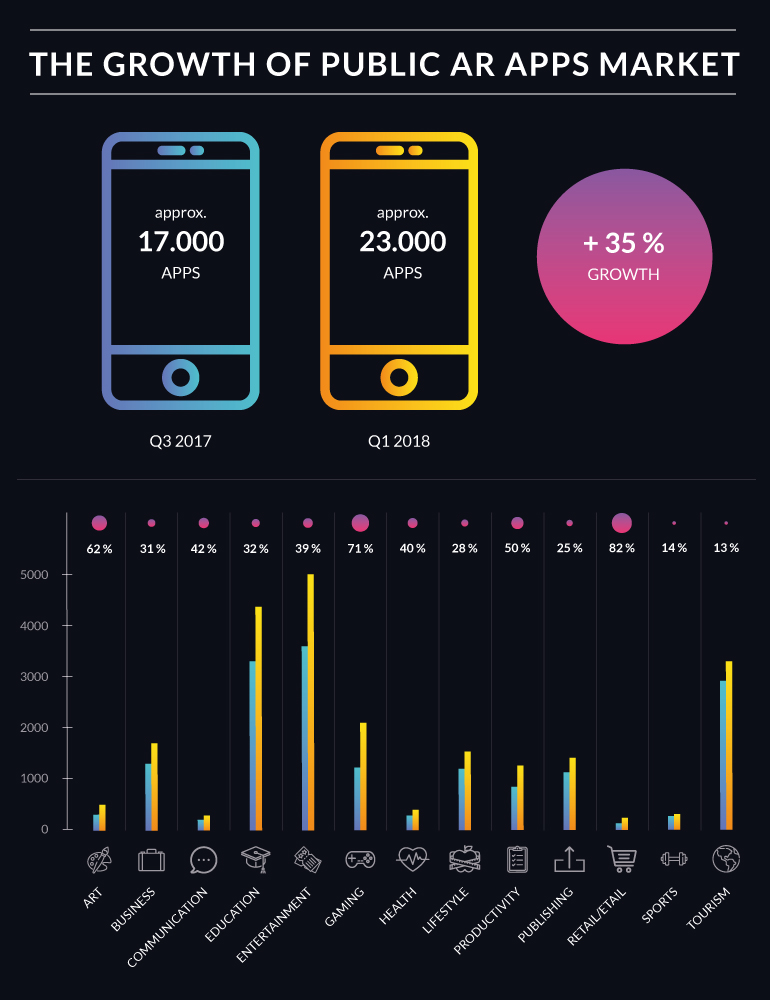 Due to its versatile applicability, AR is being used in marketing campaigns, interactive mobile games, innovative storytelling, efficient workflow solutions and more. When the subject is AR-enhanced apps, the sky’s the limit.

By using our SDK, Cloud Recognition and Studio tools, brands, agencies, and developers have been creating reliable AR solutions in the most various of fields. Navigate through the list below to check some inspiring AR showcases that were created using the Wikitude SDK.

CoCA Pop-Up (AR)t Book
As part of Seattle’s Center on Contemporary Art’s ongoing effort to push the boundaries of contemporary art—in this case by bringing new technology to its publications—CoCA selected 18 artists to work on their first technology-enhanced art volume entitled “Pop-up (AR)t”.

Direct2Artist – Showcase art with AR
As part of Seattle’s Center on Contemporary Art’s ongoing effort to push the boundaries of contemporary art—in this case by bringing new technology to its publications—CoCA selected 18 artists to work on their first technology-enhanced art volume entitled “Pop-up (AR)t”.

The Franklin Institute Terracotta Warrior AR-enhanced exhibition
The Franklin Institute is using AR to enhance their Terracotta Warrior exhibition displayed in Philadelphia until March 2018. The museum’s app, powered by Wikitude technology, allows visitors to use their smartphone to scan items and visualize rich AR content to learn even more about the intriguing history behind the magnificent clay soldiers.

AR experience: Celtic Heritage Museum
“The Speaking Celt” app is a companion app to visitors of the Museum of Celtic Heritage in Salzburg. Serving as a museum guide, the augmented celt appears every time users scan the targets. The celt tells stories about his way of living, explains elements of the museum and engages with visitors in an interactive way.


The Lenz – Gorillaz AR app by Telekom
Telekom Electronic Beats partnered up with the Gorillaz to create a new dimension in music. The Lenz app transforms magenta surfaces, the color of the Telekom brand, into digital portals which display exclusive Gorillaz content.

One Direction “1D Official Book” Companion App
Powered by Wikitude image recognition technology, with the One Direction 1D companion app for iOS and Android mobile devices, users can activate hidden, never-before-seen content by placing their mobile device over motifs and photographs within the book, as illustrated by the band’s welcome in-app video. This includes exclusive access to photos, videos, interviews, intimate clips from the band’s first audiobook and quiz questions, fed into the app throughout the year via the CMS.

‘Mirage By City Social’, the world’s first augmented reality cocktail
City Social is a London based Michelin-starred restaurant and bar that is known for providing great food, drinks, service and a stunning skyscraper view. With the intention of delighting their customers, even more, they paired with Mustard Design to create an innovative app that incorporated Wikitude’s AR technology to bring cocktails to life.

Ribena “Doodle your World” AR app
Ribena has been in the beverage industry for over 75 years. To bring life and user interaction to their ‘doodle bombing’ inspired campaign, Diverse Interactive, powered by Wikitude’s SLAM technology, built the “Doodle your World” app to provide a fun augmented reality experience.

Osmino: Free hotspot finder with AR
Staying connected on the go has never been easier! Osmino wi-fi is an innovative solution to find free wifi hotspots anywhere in the world. Powered by the Wikitude SDK, users are able to view augmented pinpoints of free hotspots around them. A direction indicator to closest hotspots is also a great feature the Wikitude SDK enables in Osmino.

Roomle: AR space designer and planner
Augmented reality is the ideal feature for planning and designing rooms and spaces. Whether you are planning a new office space, re-arranging a store disposition, building an architectural project or rethinking your living room, Roomle brings your plans to life-powered by Wikitude’s SLAM technology. Roomle allows users to find furniture in one of the world’s most complete 3D furniture catalog.

The Washington Post art and architecture AR Series
The Washington Post, the renowned American daily newspaper, created a series divided into six installments made to explore new and truly ingenious mega constructions from around the world. The acclaimed reviews of art and architecture critic, Philip Kennicott, are complemented by augmented reality to allow users to view, explore and better understand the writer’s review.

TIME Magazine Barack Obama Special Edition
To celebrate Barack Obama’s legacy and 8 years in the White House, TIME turned to augmented reality and its immersive capabilities to highlight four ‘turning points’ on the Obama administration. Each occasion was ‘made real again’ through Spinar America’s use of Wikitude technology and image recognition to render each video.

PAPER.plus: AR for the publishing world
PAPER.plus brings augmented reality to the publishing world and offers the optimal solution for merging the printed word and image with added digital value. This gives readers of traditional print products, such as newspapers and magazines, a chance to use digital services without forgoing the proven feel of print media.

“PeekPerks” retail and etail engagement app
PeekPerks is an app for consumers to experience augmented reality in retail and e-commerce. The framework contains augmented reality experiences for brands and retailers that are carefully designed to boost sales and help build customer loyalty while providing informative, engaging, interactive and personalized content to the consumer.

Media Markt Retail Engagement App
Media Markt wanted to create the ultimate shopper’s app – something that would allow their customers to take the traditional print catalog and make it dynamic, engaging, and alive. They knew they had to go beyond reality, all the way to augmented reality.

Aventuras por Albacete – The Interactive Tourism Game
Estudio Alfa created the ‘Aventuras por Albacete’ augmented reality game with the intention of providing an interactive, rewarding and playful experience for the tourists of Albacete. Designed to be enjoyed by all ages, the app includes adventurous missions, useful and interesting information, trophies, and real reward possibilities.

Hermes Virtual Tour – see the past through AR
Using advanced tracking and location data, the Hermes Virtual Tour recognizes and reconstructs, in surprisingly faithful detail, the monuments selected returning them to their former glory. Users may then navigate an augmented 3D environment mixed with the real world, discovering every detail, just as if they’d entered a time machine.


The AR industry is in bloom and the possibilities are endless. As augmented reality finds more and more space in the market, clever and creative ideas arise with it. Have an AR project of your own just waiting to happen? Download the Wikitude SDK and get busy creating your AR experience today! Don’t forget to share your awesome Wikitude-based AR project with us (info@wikitude.com) for a chance to get featured.

Halloween Special: The Dark Side of Augmented Reality