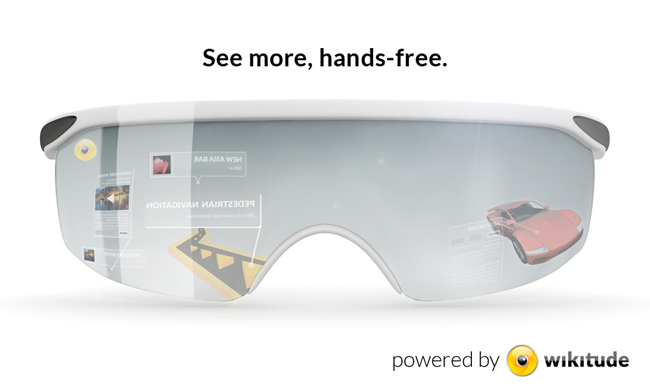 As mobile technology continues its rapid advancement according to Moore’s law, the possibilities of moving towards the sci-fi novels and films of yesteryear are becoming less and less fiction and more reality. Augmented reality. At Wikitude, we’re working every day on making the future potential of mobile technology a reality now.

We started out in 2008 as the first provider of augmented reality on smartphones, and since this time have spawned a revolution in the industry. It’s time to do it again with wearable AR technology. 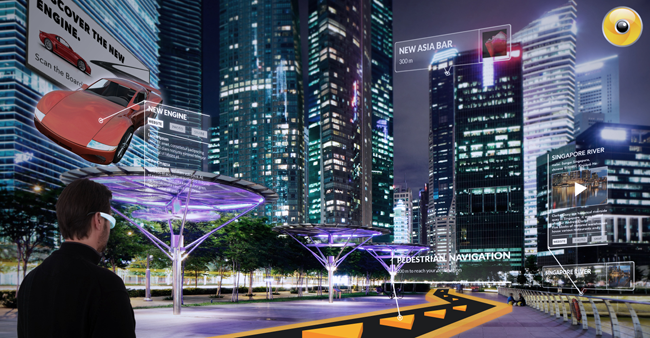 The industry has been excited and inspired by Google’s Project Glass or Google Glasses, but more so about the possibilities inherent therein. Google Glass isn’t even readily available to the public yet, and there has already been talks about augmented reality display contact lenses and a concept film about what augmented life could be like.

As the buzz around Google Glass grows, consumers can expect more and more wearable display technology to become present in their daily lives. Major consumer electronics firms including Apple, Canon, Epson, and Microsoft are already working on, or implied that they have wearable augmented reality displays in the works.

Likewise, Epiphany, Laster, Optinvent, Recon Instruments, and Vuzix are all players in the wearable display technology field, and have already developed and introduced some truly fascinating technology. As the leading augmented reality solutions provider, naturally, this is quite exciting for us. “Augmented Reality on a smartphone or a tablet is already such a cool and fascinating topic, but running applications on these new wearable devices brings AR to a totally new level and gives us a glance at how we will use mobile technology in the future.

At Wikitude we are super excited to be at the center of this and see our ideas, thoughts and visions come to life,” comments Wikitude CEO, Martin Herdina.

Why Wikitude on AR Glasses?

With wearable augmented reality hardware in sight, Wikitude’s software assets are filling the gap for the next generation of both consumer as well as enterprise AR propositions.

Over the course of the past 4+ years, Wikitude has grown from a points-of-interest app to a full-fledged augmented reality platform, complete with 6,300+ AR mini apps, an AR navigation solution, a 100,000+ strong augmented reality developer network, 100+ million points of interest around the globe, and in-house technology that covers the entire gamut of possible augmented reality solutions. This includes an in-house R&D lab producing a proprietary image recognition and tracking engine and 3D content capabilities.

The results of these developments are available today within the Wikitude SDK. This technology enables 3rd party app developers to take full advantage of simple yet powerful web technologies to build impressive augmented reality experiences. “The current AR ecosystem is a bit like a puzzle, for which wearable display hardware provides a major piece”.

The introduction of multiple AR glasses in 2013 will bring the vision of a natural and hands-free augmented world experience forward. We at Wikitude are ready for it with our proprietary computer vision technologies, our global content proposition covering value adding use cases, and an enthusiastic AR developer network waiting to jump on new hardware platforms and opportunities,” adds Andy Gstoll, CMO, Wikitude.

Everything that augmented reality has done for the technology industry thus far in the travel and tourism, art and museums, print media, location-based services, health and safety, gaming, and education industries, is about to get a whole lot bigger, and a whole lot more prevalent in our daily lives. One of the biggest complaints from end users in the past was that holding your phone or tablet device up in front of you just wasn’t a natural or practical application of the technology. With wearable display technology, this barrier is gone. Adding to this hands-free enjoyment, we’re very excited about the possibilities of navigation with wearable displays.

Our Wikitude Drive augmented reality navigation product was received with great enthusiasm when released in 2011, and by running Wikitude technology on AR glasses, users will be able to enjoy hands-free navigation anywhere they choose…all while biking, walking, driving etc. in a completely natural way, all without having to look down at a mobile device. The convenience and natural ease-of-use of this type of technology and display are paramount.We’ve recently incorporated the ability to add 3D objects into augmented reality projects, a feature that completely changes the way augmented reality can be seen. No longer are developers limited to two-dimensional presentations, but users of wearable display devices will be able to fully visualize an object, walking a full 360 degrees around it. This holds huge potential for the gaming industry, another industry poised to reap the benefits of wearable displays, and one that Wikitude is already aiding in this quest.

Our introduction of image recognition and tracking technology last year has provided a number of benefits to consumers and businesses alike. This is one of the most used features in our SDK, and on a wearable display, the possibilities of augmenting a user’s surroundings multiply exponentially.

The sample app that we built in-house, Scan your Money,” will now allow users to immediately know just how much those foreign bills in their pocket are worth, and there’ll be no need to bring out the mobile device, launch the app, scan, and then receive results. Businesses can benefit from this image recognition technology through immersive and interactive marketing and advertising campaigns, product tutorials, turn-by-turn directions to locations, and many many more opportunities!

The hardware of wearable display devices puts the future of technology on the very near horizon.

Wikitude is proud to be the augmented reality platform that will power these devices and delivering an unparalleled user experience. See more, hands-free with Wikitude.
AppleAugmented-RealityCanonEpiphanyEpsonLasterMicrosoftOptinventRecon InstrumentsVuzixWearable Display

How technology can be harnessed to do good in the world